What is AAU Basketball?

What is AAU Basketball?

When you are done reading this article you will understand what AAU Basketball is (and the different terms), know when you can and should start playing, understand the differences between AAU and school ball and why some players participate in more intense team ball while others do not.

When people ask about AAU ball they are usually looking for a team to play on. Or they are seeking a way to get additional instruction for their kids. This post is intended to shed light on joining a team. Individual development, though it will always factor into team stuff, is not addressed here.

AAU basketball comes with a lot of different names. Officially it stands for the Amateur Athletic Union. It can also be referred to as club basketball or travel basketball. Generally, it refers to non-school teams that are competing.

When  should players start AAU?

Leagues and teams are available as early as kindergarten. Between youth leagues, YMCA, Boys & Girls Clubs and other organizations, there will usually be opportunities to play.

Here is what we suggest as a guideline.

The “Why, How, What” Spectrum

Opportunities come at all different levels. An easy way to gauge where a player is at is by looking at why they are playing, how their abilities are progressing and the what type of competition level they are ready for. This is just an estimation and not an exact science.

Why are they playing?

We list this one first because it is the most important. The most successful players play because they love the game. That love keeps them motivated through tough times. Their love for the game was established because when they started playing they had fun. Over time that love may turn from fun to work. But that makes sense. Most people that are great at their jobs love their work.

How are their abilities?

This is where you start looking at skill level and athletic ability. Some of this will naturally get better over time as the player grows and matures. The skill and basketball knowledge can only develop through hard work and practice.

Players should start by learning the fundamentals so that there is a solid foundation to build on. When the fundamentals are established and understood, more advanced skills and concepts can be taught and learned.

What level are they competing at?

Basketball is a team sport so players will need to play on a team at some point. This means competition will now be a factor.

In the beginning, we suggest almost no competition until fundamental skills are taught and understood. If competition is introduced too early then players lose focus on developing fundamentals and it may affect the level of fun they are having.

However, when skills are learned and the player is having fun, now competition is a good thing. It puts those skills into action and can give players a sense of accomplishment.

As players mature and get older, the level of competition will continue to rise. At the highest level, the competition is against the most elite players in the world.

Compare the player to the team

If a player joins a team then they will be competing in a league or tournament or both. Ideally, the player will be in the same place on the spectrum as the team. The hardest area to evaluate may be the competition level. Again, this is not an exact science but here are three things to consider:

For improvement, ideally, the competition level should only be at or slightly higher than the team’s level. This will challenge the players, take them slightly out of their comfort zone and create opportunities to improve without destroying their confidence. Confidence is huge for younger players.

At this point, you have a better idea of what AAU basketball is. But why should players play AAU? Or is playing AAU at an early age a bad idea?

Click here to read our article “Why Play For an AAU Team?”

Want to learn how AAU ball can help your development or see how to choose a team? 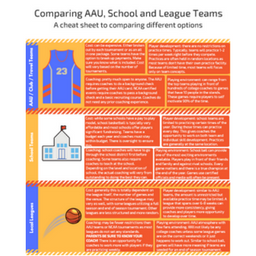 Other Pages You May Be Interested In Checking Out